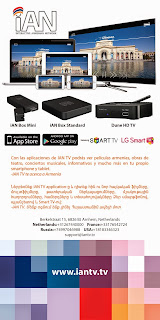 Catholicos Aram I of the See of Cilicia in UAE

Catholicos Aram I of the See of Cilicia visited the Armenian Church of Sharjah yesterday. See below his sermon on this occasion (in Western Armenian).

In the sermon he explained the meaning of being true Christian. Also he saluted all Armenians who contribute to the advancement of the UAE community regardless of their affiliations. He also praised UAE leadership for taking care of people from all religions and nationalities in this country.

He met with representatives of Armenian organizations and councils yesterday evening in city hotel.

His Holiness will remain in UAE until 13 December during which he will meet with community personalities.

Today he is visiting the Armenian weekly school.

1) The highlight of the visit:
Consecration of the Holy Martyrs' Armenian Church in Abu Dhabi
12 December 2014, 04:00pm

Keeping the traditions of Kutahya Armenians

New comment by Sato Moughalian
Fascinating article--a couple of corrections. Neshan Balian came to Jerusalem in October 1919, not 1917. The British were not even in Jerusalem until mid-December 1917. The Armenian ceramist David Ohannessian of Kutahya was introduced to Jerusalem Governor Ronald Storrs by Sir Mark Sykes in December 1918, and was the first to arrive. Sykes, Storrs, and a number of other British officials remembered the magnificent tiled room that Ohannessian had created for the Sykes estate in Yorkshire in 1913, and sought him out to establish a ceramics tradition in Jerusalem. Ohannessian arrived in Jerusalem in early 1919, and then went back to Kutahya in August 1919, returning with materials and with Balian and Karakashian, who were under his employ until 1922, when they left to found their own joint workshop. It is wonderful to see that the descendants of Balian and Karakashian continue their marvelous work today.
Original article appeared here:
http://www.azad-hye.net/news/viewnews.asp?newsId=148shs73
No comments:

Kuwait: The Bible Society in the Gulf launches the captivating Make-Your-Own Children’s Bible in Armenian during a Special Blessing Ceremony 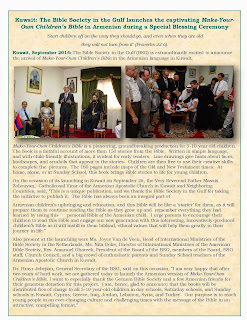 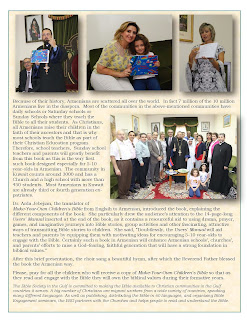 “A Middle East With No Minorities?” 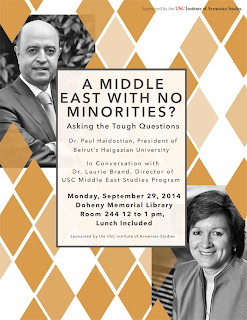 Reverend Paul Haidostian, President of Beirut-based Haigazian University, will be the guest of the USC Institute of Armenian Studies at a lunch-time conversation to be held on Monday, September 29, 2014, at noon at the Doheny Memorial Library Room 244, on campus.

Entitled "A Middle East Without Minorities?" Dr. Haidostian will speak about the recent turmoil in the Middle East and its impact on the various ethnic and religious minorities of the region.  USC Professor of International Relations, Dr. Laurie Brand, will be guiding the discussion.

Rev. Haidostian has been president of Haigazian since 2002. In addition to his local and international responsibilities in educational, religious and ecumenical organizations, he teaches, lectures, and writes in Armenian, Arabic and English on a wide variety of topics including Armenian identity, ecumenism, youth, social issues, theology, religion, and community.

Rev. Haidostian is currently the Chair of the Central Committee of the Union of Armenian Evangelical Churches in the Near East. He will be a guest at the Institute's anniversary gala to be held at the Beverly Hilton on September 28.

Dr. Laurie Brand is a professor of international relations at the University of Southern California School of International Relations. She specializes in the international relations of the Middle East, including political economy of the region and inter-Arab relations. She is the author of several books on the region, including most recently, Official Stories:  Politics and National Narratives in Egypt and Algeria, published by Stanford University Press. She is a past president of the Middle East Studies Association of North America in 2004.

Salpi Ghazarian, the newly appointed director of the USC Institute of Armenian Studies, says, "We invite the community to the USC campus to this program. This is not a lecture. It's a conversation between two people who know the region well. Dr. Haidostian's intimate knowledge of the Middle East, and his readiness to share his insights are very valuable, now, at a time when we are all trying to understand what is happening in the Middle East, and why. Dr. Laurie Brand heads USC's Middle East Studies Program and we're grateful for her participation."

Lunch will be served.

We advise guests to park in Parking Structure D, which is located on the corner of Jefferson and Figueroa (across from the Shrine). See attached map for the location of the event (Doheny Memorial Library, Room 244).

Please call (562) 508-8474 if you have any questions regarding the event, including parking and directions.

Established in 2005, the USC Institute of Armenian Studies supports multidisciplinary scholarship to re-define, explore and study the complex issues that make up the contemporary Armenian experience — from post-Genocide to the developing Republic of Armenia to the evolving Diaspora. The institute encourages research, publications and public service, and benefits from communication technologies that link together the global academic and Armenian communities. 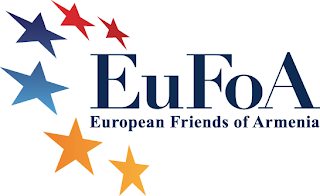 The International Hrant Dink Award Ceremony, which will be presented for the sixth time on Hrant Dink's birthday, September 15, will be broadcasted live in English on www.hrantdink.org and www.hrantdinkaward.org.

The award ceremony will take place on September 15th, 2014 between the hours 20.00-22.00 (between UTC/GMT +2 hours and UTC/GMT +4 hours) at Cemal Resit Rey Concert Hall. At the ceremony, Ara Dinkjian and Ari Hergel will take to the stage, and the awardees of 2014 will be announced. The ceremony will be presented by Olgun Simsek.

Every year, the award is presented to two people, groups or institutions from inside and outside Turkey, who work for a world free of discrimination, racism, and violence, take personal risks for their ideals, use the language of peace, and by doing so, inspire and encourage others.

With this award, the Foundation aims to remind to all those who struggle for these ideals that their voices are heard, their work is visible and that they are not alone, and also to encourage everyone to fight for their ideals.

YEREVAN (ArmRadio)—Recent events in the Middle East suggest that motives and geopolitical goals have changed. The situation will inevitably affect the large Armenian communities formed in the Middle East in the last one hundred years since the Armenian Genocide. But all is not against Armenians, editor-in-chief of the Beirut-based Aztag daily newspaper Shahan Kandaharian and editor of Los Angeles-based Asbarez daily Apo Boghigian told reporters in Yerevan.

The ongoing instability and new developments in Middle East countries with large Armenian communities are of strategic importance for Armenians both in Armenia and the diaspora, they said.

According to Shahan Kandaharian, the trend of events has considerably changed and has grown into a struggle for resources.

"The Arab Spring has now changed its face, and the radical expressions of Islamism constitute the major threat today both for the region and the world," he said.

Kandaharian said the situation in Lebanon is relatively calm compared to its neighboring countries. He believes Lebanon will not engage in what he called a regional war. He considers, however, that difficult days are awaiting the Armenians of the Middle East. The question refers to the migration of Armenians, who are leaving mostly in two directions – Lebanon or Armenia. Whether they move permanently or temporarily is a different question, he added.

Speaking about the American Armenian Diaspora, Asbarez editor Apo Boghigian said: "We should create a situation where we can turn the loss into some gain. The US is an environment where there is an issue of survival. The problems of assimilation and maintenance of the Armenian organizations can no longer remain unsolved. We need to search for new ways, new methods."

Thus, the new situation is a challenge to Armenia, and particularly the Ministry of Diaspora. Major problems are the preservation of language and the availability of authentic information to avoid unnecessary panic. Apo Boghigian pointed to the Kessab events as an example of unsuccessful media coverage of an event.

As part of its ongoing assistance to Syrian-Armenians resettling in Karabagh, the Tufenkian Foundation has organized a number of fundraisers around the world.
As a result of these activities, the Foundation recently participated in financing the renovation of two apartment buildings in the NKR Kashatagh region.
The first building is a 12-apartment building in Kovsakan town, while the second is a 10-apartment building in Ishkhanadzor village. Both are situated in Southern Kashatagh.
We are glad to inform that the renovation of the Kovsakan building has
been completed, and the official opening took place on April 10.
Read more here.
No comments:

A father learns that his twin daughters have survived the Armenian Genocide of 1915. He travels many countries including Cuba, USA (Dakota) following their traces.

The movie is in German language and starts from the city of Mardin in Turkey.

See the trailer. Movie will be available in October. Now it is being displayed in the Venice Film Festival.